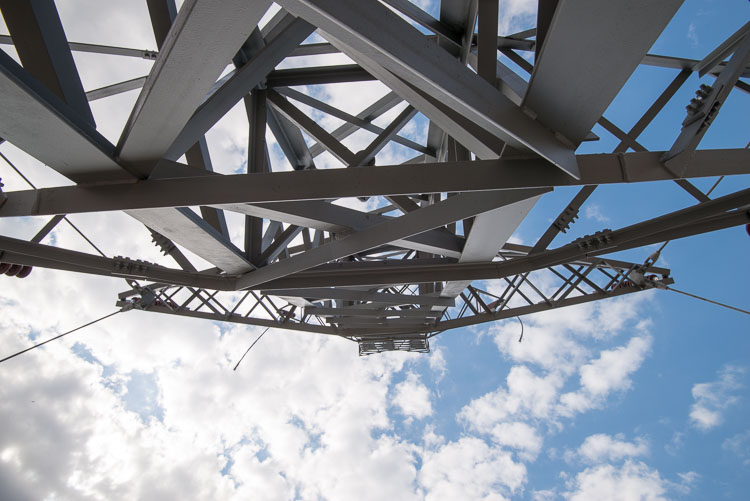 This is the typical picture of Bullet From A Shooting Star by Alex Chinneck, one of the highlights of the 2015 London Design Festival LDF15, and is what we were first confronted with when we went to Greenwich to see what all the fuss was about.

It first hits you when you turn the corner that provides your first glimpse of the piece in the distance, peeking over the nearby hoardings and fences.  Despite the photos and descriptions, the first time you see it (if you’re us), you pause as you realise it really is what everyone said!  And no sooner have you paused than you speed up, to get the full picture even faster.

And then you turn the corner into the little road it’s on, get past the final fence, and see it there in all its glory stretching out, precariously balanced on its point.  That’s a moment we won’t we forgetting for a while . . .

And yet some conflicts need to work themselves out in our heads at this point.  While it’s massive – 15 tonnes and 35 metres – it’s not on the same scale as the pylons you drive past on the motorway.  And that’s our only past reference point to anything like this.  Then there’s the fact that because it’s at an angle, it doesn’t tower overhead as far as we imagined it would.

We just sat and looked at it from a distance for a while until it started to become familiar, taking in its shape, scale and imposing personality.

Seeing the Trees for the Forest

What this article is really about though, is what we saw as we looked more closely.

We needed time for the size and overall shape to fade slightly, so that we could refocus on the details.

And what we discovered was a fascinating mix of shapes within shapes, contrasts of form, and pieces of texture and colour that we just didn’t register to begin with.

Reading the sign outside, we learned about the many different people and organisations involved in executing the concept, and got a sense of a myriad of different skills and personalities all playing their part.

We found that looking at the details of the structure made us think about the many individual contributions.

Just as a quick aside, we’ve previously been involved in major projects with large corporates and smaller firms.  From a project management perspective, we couldn’t begin to imagine what it must have been like for whoever was in charge of co-ordinating all the players involved, getting them to create their pieces of the puzzle separately.  And then the thought of one big day when everything would need to be brought together to the same place and installed.  Mind-boggling.

Anyway, back to the day we were lucky enough to see the finished article for ourselves.

We just stood for a while first, letting our experience of what we were seeing adjust, form and re-form in front of us until we stopped seeing it as a single behemoth.  Instead we found it had transformed itself in front of us into an intricate conglomeration of separate parts, connected by a web of people, tools and machines.

We’ll take you through the images that came from our visit, but first another slight detour.

What Did Alex Chinneck Intend?

Before going to see Shooting Star in the flesh, we tried to get a sense of what its creator was aiming to do.  There are plenty of visual references to the work around, but far fewer written pieces, and even fewer that don’t seem to be part of the LDF PR script.

However, we found some fascinating insights into Alex Chinneck, the person, from the few interviews he’s given.  We found the most interesting to be from the folks at “It’s Nice That”, one of our must-read sites.  They met him earlier in the summer, and wrote an at-times revealing picture of Alex Chinneck, the man behind the work.

After looking through the wide range of thought-provoking pieces he’s put together around the country, we were full of a admiration for his ambition, the way his mind is wired, and his ability to translate what are clearly complex, multi-faceted ideas into bold, in-your-face installations.

We came away from our reading with a picture in our heads of a gifted creative professional with an unrepentant style that seems to make some parts of the establishment uncomfortable, mostly because it’s successful.  But there also seem to be some who are perhaps trying to imply a lack of depth, but aren’t saying so outright.

If we’ve interpreted that right, then it perhaps explains our sense of something between frustration and perhaps even defensiveness in his tone at times, especially when on the subject of critics.

Below are a few of his words that led us to this view, see what you think.

“I just don’t serve my work with a large portion of bullshit, and I made a point of that. Maybe it was a bad strategy.”

“I think I’m developing a very very strange relationship with the art world. I think at times accessibility and popularity don’t go hand-in-hand in the art world, and I think art critics even if they like my work won’t want to say it”

“When my work’s been put in front of certain curators or institutions it’s met the same reaction, which is one of lacking a kind of metaphysical depth. It’s a frustrating response, as while my work might not be incredibly conceptual, it’s incredibly complex and contextual.”

For us, the complexity was clear at Greenwich, and is what led us to highlight this specific piece for an article of its own, out of the hundreds we saw during LDF15.

After we got used to the size and overwhelming nature of the piece, we started to see things within that appealed to us, and gave us a second, deeper experience from the same piece.

What Did We See?

Our second take on Bullet From A Shooting Star was not straightforward – there seemed to be many conflicting messages for our eyes and brain to take in, and as one formed, another appeared.

We took lots of pictures of everything that caught our attention, and when going through them slowly at home, we started to appreciate even more what we had been seeing.  Broadly speaking, three things stayed with us from the afternoon:

We didn’t initially give too much attention to how Alex Chinneck named his work, but as we looked harder we felt a sense of movement from the different shapes, and started to notice the different arrows, points and lines leading our eye upwards.  And unexpectedly we found ourselves thinking of rockets, plumes of water off the bow of a speeding boat, and the tail of a comet.

At first glance, Bullet from a Shooting Star is smooth and matt, with a uniform, grey surface that you look past without noticing.  But as you keep looking, and then when you get close, there’s a rich variety of textures and colours that resonate with the industrial setting.

Despite the short time it’s been exposed to the elements, the work has many areas of light surface rust, roughness and scarred surfaces, many initially hidden from view in corners and pockets. Even the large slabs of metal that make up the structure are pitted.

There are also splashes of colour, from the oranges and browns of the rust streaks to the red of the ceramic insulator discs.  There are also coloured lights mounted within the structure, presumably to light it up at night.

Below is a selection of the varied textures and colours we’re talking about.

Again, our first glance was deceptive.  At a distance the structure seemed to be close to symmetrical and full of repeating patterns.  But beyond this lie curves among the straight edges, frayed cable-ends that just hang disconnected, and a structure that is inherently off-balance in concept.

We also appreciated the surroundings and location in this context. The backdrop of industrial Greenwich Peninsula from one angle was in complete contrast to having Canary Wharf behind the structure.  Different again was the angle that set the work against the unique lines of the O2.  Just moving where we stood gave us a three totally different views, each with its own distinct asymmetry.

Check out the gallery below, and see if this aspect appeals to you as much as it did to us.

What Does All This Mean?

We didn’t write this with a conclusion or lesson in mind, nor were we trying to “explain” what Bullet From A Shooting Star is about.

What we did want to do was share our experience of enjoying and appreciating the work, and take you through what we noticed along the way.

We found the visit enjoyable and thought-provoking, in a way we hadn’t expected.

We realised that the extra time beforehand to try to understand the intent and approach of Alex Chinneck contributed greatly to this.

We’re also glad we took the time to let the installation “settle” and evolve in how we perceived it over the afternoon.  That might sound a bit kooky, and we were a bit apprehensive about putting it down in words – but the experience was very real for us.

Bullet From A Shooting Star also left us really keen to see some of Alex’s other work.  When we do, we’ll let you know what we make of it.

Finally, we want to leave you with the words of Alex Chinneck that resonated most with us, and best summed up our time with Bullet From A Shooting Star:

“I would argue that our projects are simple on the surface but extraordinarily complex.”