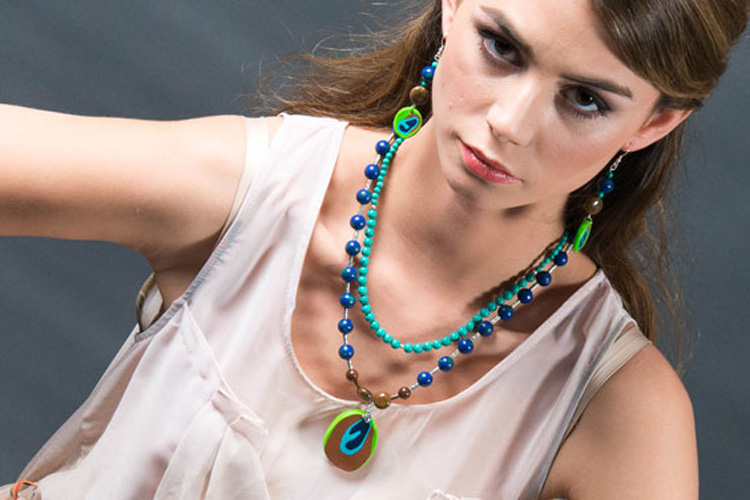 Peacock Necklace by Zayah
Home
Editions
(From the Archives)

The Story Behind . . . Zayah’s Peacock Necklace We were asked to share the thinking behind the Zayah Peacock necklace with a customer the other day, and found that others were interested in hearing about it too.   So we’re sharing it more widely today.

The peacock is one of the most beautiful birds in nature. There are three types of peafowl – Indian, green and Congo. Most people are used to seeing the Indian variety in zoos around the world. Seen in Pakistan, India and Srilanka, particularly in the forests, peacocks mostly live on the ground, though they sleep on trees. They are quite frequently seen in forests in the countries they are native to. It’s only really accurate to refer to the male of the species as peacock, as the female is known as the peahen and collectively they are called peafowl.  But this is one of those situations in language where use has overtaken accuracy.

Peafowl have a raucous call and are not particularly nimble. But the male of the species has been gifted by nature with the most spectacular set of feathers. When the peacock is attempting to get the attention of its mate, it shakes its feathers and spreads them into a fan, a sight to behold. Recently, scientists have also discovered that in the shaking of the feathers, peacocks are actually having infrasonic conversations which are not evident to the human ears but heard by peahens!

The peacocks found in India have a stunning blue green body, which has been inspiration for the Zayah necklace, Peacock. Peacock feathers and peacock colours have since long been seen as jewellery for women through history. For the Zayah team, the peacock brings to mind adjectives of grand and stunning.  We wanted to create a piece that was inspired by this wonderful bird, and would cause the same adjectives to pop into mind. We spent quite a bit of time trying to imagine what this would look like. The design led us into looking at a double strand, which usually symbolises grandness. Then of course, we had the fun task of finding gemstones that for us represented the colours of the peacock. We settled on lapis lazuli and malachite beads, which are dark blue with green shots through them. For the bright blue green, we settled for the turquoise beads from the Hubei province and the browns or bronze that are present around the edges, we selected a Jasper, called the Snakeskin Jasper. As we sketched and thought about the design, it was essential to look at a very special pendant that we handmade to round off the stunning necklace. We then looked at a complementary earring design to go with the peacock necklace.

As this is ideal as a statement piece for partywear, we were tickled to discover that a group of peafowl are called a pride, party, or ostentation!